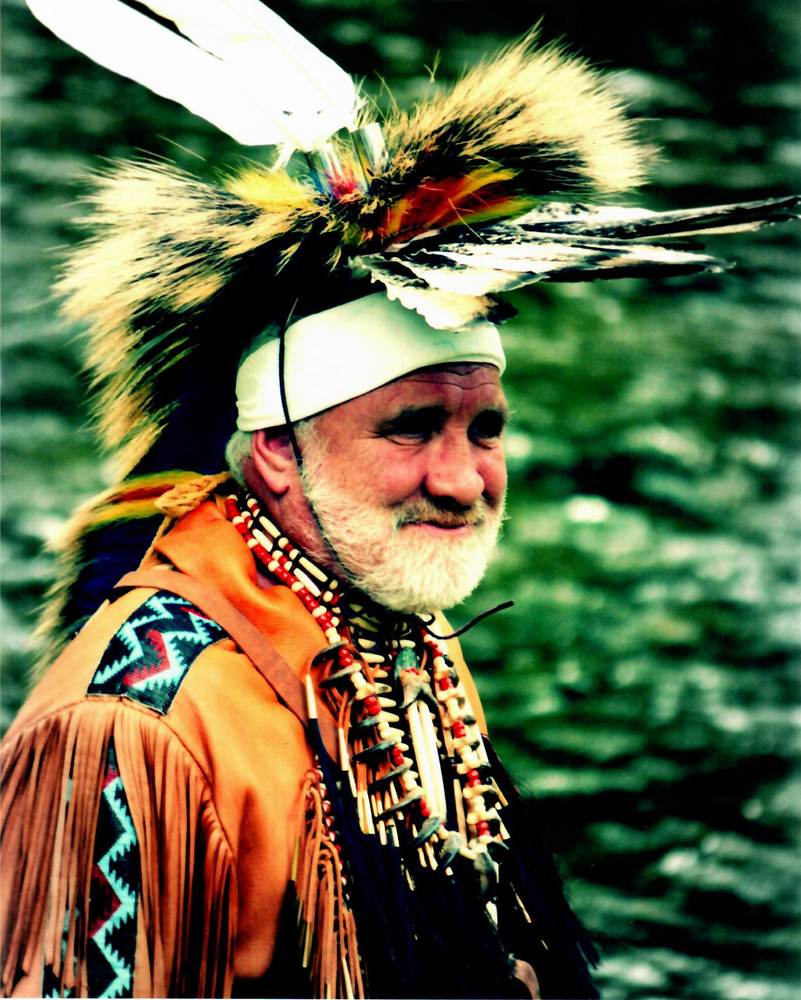 Please share a memory of Michael to include in a keepsake book for family and friends.
View Tribute Book
Michael "Spirit Carver" Brandon, Wolf Clan (Ani' Waya'), Cherokee Nation, Tahlequah, OK, crossed over Saturday, June 26th, 2021, peacefully, surrounded by his family. Michael fought a courageous battle against stage IV laryngeal carcinoma. Nobody fights alone. Michael had the love and support of his family and friends since his diagnosis. Michael is a descendant of Nancy Ward (Nanyehi Ghigua), "She who walks among the spirits", beloved woman of the Cherokee Nation. In a battle Nancy hid behind a log, chewing on bullets so that they would do more damage. When her husband, Kingfisher, was killed, she picked up his rifle and rallied the other women to do so. She was the daughter of Chiefs of the Cherokee Nation and sat amongst war & peace chiefs. Michael honored his Native American heritage. He was active in the local Native American community for over 30 years. He also rode his motorcycle on the Trail of Tears...the same path his ancestors walked. Born July 4th, 1958, he was the son of the late Master Sergeant Lee Brandon, U.S.A.F., a 20 year retired missile man. Michael traveled his youth with his father from base to base all over the world. Michael chose to honor his father's military service by volunteering within the local veteran community. He was affiliated with Harveys Lake American Legion Post 967, Shickshinny American Legion Post 495, and Dallas American Legion Post 672. He was a member of the Benton VFW Post 8317 Auxiliary, Sons of the American Legion, Black Walnut Post 510. For the last 11 years Michael has been a member of the American Legion Riders serving several local chapters. He was a member of Pennsylvania Region 5 American Legion Riders. He led many motorcycle benefit rides for local veteran organizations such as Hunts for Healing, Patriots Cove, Five-By-Five, Paul's House, and W-B Veterans Administration Medical Center. Michael also volunteered at the Wilkes-Barre VA Community Living Center Unit, delivering Christmas presents to the veterans, escorting them to functions such as the Bradford County Veteran appreciation event, etc.. He also participated in local veterans parades, attended Rolling Thunder, Washington D.C., and Philadelphia veterans parade. He escorted the Freedom Express, Traveling Wall, Pepsi Co. Valor Rolling Remembrance. He participated in Wreaths Across America, Fort Indian Town Gap. Mike was the Road Captain and Co-chair of the Karen Boback Ride of Honor. He attended military funerals and stood in respect in many flag lines honoring our fallen. Michael was a graduate of Lake Lehman class of 1977. He retired from P&G Mehoopany in 2004. Known as Iron Mike to his co-workers, he eventually returned to work as a welder with American Asphalt for 15 years until Covid-19. He was last employed by Chewy, Hanover, PA He was preceded in death by his daughter Maggie. Michael is survived by his loving wife Sheila, Children Anne Marie Donald (Josh), Brian Brandon (Misty), Telysa Hughes (Dave), Caressa Snyder (Ryan), 11 Grandchildren, 1 Great-Grandson. Mike was a fine wood craftsman whose work graces many homes. Per Michaels request there will be no funeral/viewing. His request is for family and friends to gather in his honor. Special thanks to caregivers Patricia Matthews, Caressa Snyder, Dr. David Greenwald and the staff at Hospice of the Sacred Heart (especially our angel Hope.) Memorial donations for medical expenses can be sent to: Sheila Brandon 1337 State Route 118 Sweet Valley, PA 18656 A Celebration of Life family style picnic will be held in his honor at the Shickshinny American Legion, 575 State Route 239, Shickshinny on July 18th at the Pavilion from 3-7 pm. All are welcome to attend…please bring a covered dish. A motorcycle escort is requested for Mike's Final Ride. Info will be posted on www.facebook.com/michael.brandon.10 A private family Native American Ceremony will be held as we dedicate his garden. An Honor and Remembrance Native American Gathering will be scheduled later this year. Arrangements are by the Curtis L. Swanson Funeral Home, Inc., corner of routes 29 and 118, Pikes Creek.
To send flowers to the family or plant a tree in memory of Michael Brandon, please visit Tribute Store
Sunday
18
July

Share Your Memory of
Michael
Upload Your Memory View All Memories
Be the first to upload a memory!
Share A Memory
Send Flowers
Plant a Tree