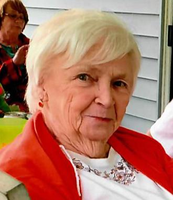 Sally C. Carey, age 85, of Dallas, Lehman Township passed away peacefully while resting on January 9th, 2021. Born on April 11th, 1935 in Wilkes Barre, PA., Sally was the youngest and last surviving of twelve children born to the late Anthony and Mary Corcoran Carlin. Sally was employed by the Visiting Nurse Association for more than 20 years, until her retirement in 1997. Mom met William E. Carey in late July of 1980 and after a lengthy courtship of just over 2 months they were married in early October of 1980. Bill originally fibbed about his true age and we can only guess she may have originally fibbed about the number of children and grandchildren she had, which he fully embraced. We are all eternally thankful for their happy and inseparable, 18 years together, until Bill's passing on September 2, 1998. In addition to her parents, and husband Bill, Sally was preceded in death by brothers, Paul, Anthony, Thomas and Michael Carlin; sisters Ann Carlin, Loretta Cowell, Mary Claire Vaughn, Ruth Lebert, Eleanor Brisk, Margaret Hollander and Jean Habib; sons, George Munster and Andrew Munster; grandson Shawn Munster and step son in law Rick Williams. Sally is survived by sons, Joseph Munster, Michael (Alice) Munster, Paul Munster, Daniel Munster and finance Michelle Macking; daughter Susan (Leonard) Krispin; daughter-in-law Diane Munster, stepdaughters Sharon Williams and Patricia (Ed) Bolton; grandchildren, Adrienne Pollock, Sandi (Juan) Custodio, Alyssa (Joe) Piazza, Stephen (Marissa) Munster, and Charles Krasniak; numerous great grandchildren and one great -great granddaughter; extended family of grandchildren, great grandchildren, and great- great grandchildren, cousins, nieces and nephews. In addition Sally is survived by her "Breakfast Club" friends, Kim, Lisa, Becky, Karen, Lorraine, and Maggie, as well as her longtime friends of many, many years, Carol Kelsch and Josephine Chervenak. Funeral services will be held Thursday, January 14, 2021 at 10:30 am from the Curtis L. Swanson Funeral Home, Inc., corner of routes 29 and 118, Pikes Creek, with A Mass of Christian Burial at 11:00 AM from the Our Lady of Mount Carmel Church, 2011 State Route 29, Hunlock Creek, PA 18621 with Rev. Shawn Simchock, officiating. Due to COVID restrictions, masks and social distancing will be required. Visitation will be from 9:30 AM to 10:30 AM on Thursday at the funeral home. Interment will be in St Mary's Cemetery, Hanover Township. In lieu of flowers, donations can be made to any charitable cause or persons that the donor so desires. In other words, pay it forward. Mom always said, "We take care of one another and remember there is always someone out there that is worse off and needs it more than you do."