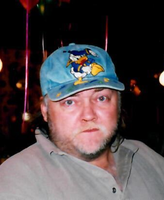 Ernest Guy Evans, died at home surrounded by his loving family on August 6, 2020 after a lengthy and courageous battle with cancer. Born on February 13, 1952 in Wilkes-Barre, Pennsylavania. Ernest was the oldest of 7 children of the late Romayne Morris Evans and Ernest He is preceded in death by his parents, his grandmother, Melva Morris, Aunt , Betty Morris Prince and Nephew, David Cardwell. He is survived by son, Kristopher Evans of SweetValley, Daughter, Aimee Evans of Georgia, Grandsons, Kris Evans Jr. And ZachZangilis.Brothers, Gary Evans, Harveys Lake, Gregg Evans(Mary), Idetown, Sisters,Tammy Evans, Dallas, Debbie Evans, Dallas, Colleen Evans-Nice (Scott), SweetValley, and Melissa Evans-Shaver (Hall) , Shavertown. Cousins, Bob Williams and Davene Cardwell. Many wonderful nieces and nephews including his "Little Buddy Owen." Ern was a lifelong resident of the "Back Mountain." He attended the Dallas Area Schools and lived in Fernbrook until he was married and settled in Sweet Valley to raise his family. As a young man he was a talented musician. He played in a high school band called, "The Shady Ones." They were popular and played a variety of music. Ern never was a fan of the limelight, so he kept his talent close to home and taught anyone that had an interest in learning. His natural music ability combined with his patience and easy going personality earned the respect and adoration of all he taught. At the age of 17, he started a career in printing. His first job was at Offset Paperback in Dallas. He started as an entry level Flyboy and worked his way through the ranks. Eventually he became a Pressman and finally a Journeyman. Ern was very mechanically inclined. There is not machine created that he could not fix. He retired after 30 years in printing business. Ern lived life on his own time. He was charming, funny, wise, and talented. He was an absolute Master Craftsman. Building all kinds of furniture, cabinets and moldings for his home. Hands down his favorite pastime was swimming. Ern would literally spend an entire day floating in the pool, lake, or creek. As a point of pride, he purported to have taught every member of his family to swim. He loved visiting Amusement parks. He would ride any coaster anytime. To his children he was a loving supportive dad. He would spend countless hours on movie marathons and video game wars. Ern was exceptionally proud of his kids. To his nieces and nephews he was an adventurous super hero that did not mind if you shot him with a bb gun and would spend countless hours having diving contests. To his brothers his was their big brother and pal. Fond memories of their days building and riding motorcycles. To his sisters he was a fiercely protective big brother. Some will remember , "The Lifter". He was Always there to lend a hand and fix whatever you were attempting to do. To everyone that ever knew him he was intelligent, funny, loving and loyal. He was someone that you were better person for having known him. Everyone has a story and most are about what, "Butchie" taught them. He will be sadly missed by all that loved him. A graveside service will be held Monday, August 10, 2020 at 4:00 PM at the Maple Grove Cemetery, Lake Twp., with Pastor Carol Folk, officiating. Arrangements are by the Curtis L. Swanson Funeral Home, Inc., corner of routes 29 and 118, Pikes Creek.