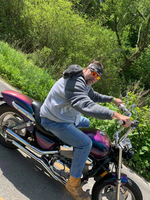 Rodney A. Smith, age 46 of Monroe Twp., passed away unexpectedly from a Motorcycle Accident Saturday, June 20, 2020. He was born in Wilkes-Barre on June 17, 1974 and was the son of the former Kathy Brink of Hanover Twp. and the late Daniel Smith. Rodney was employed as a truck driver for various companies. He enjoyed riding motorcycles with sons, Andrew, Garrett and Tommy and playing guitar in the band "BlackHorse" with his brother and cousin. In addition to his father, he was preceded in death by Kandi Gregory. Rodney is survived by his wife of 23 years, the former Jennifer Ayers; sons, Tommy, Andrew and Garrett Smith and his brother Todd. A celebration of life will be held Saturday, June 27, 2020 from 3-5 PM at Mr. Smith's home, 11 Myers Lane, Monroe Twp., PA 18657 Arrangements are by the Curtis L. Swanson Funeral Home, Inc. corners of routes 29 and 118 in Pikes Creek.