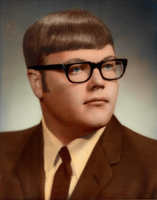 Jack Leslie Kocher, age 70 of Noxen, passed away Monday, March 2, 2020 at the Residential Hospice, Wilkes-Barre. He was born in Wilkes-Barre on May 4, 1949 and was the son of the late Leslie Layton and Mildred Ann McKenna Kocher. Jack graduated from Lake-Lehman High School in 1967 and received his bachelor's degree in Elementary Education from Bloomsburg State Teacher's College in 1971. He later furthered his education and received his master's degree. He was a member of the Grace Community Church, Dallas, the National Education Association, the Pennsylvania State Education Association and the Tunkhannock Area Education Association. He was an avid reader, leaning towards books about history and Christianity. Prior to his retirement in 2004, Jack taught elementary classes at the Tunkhannock Area School district for 33 years. In addition to his parents, he was preceded in death by sister, Jeannie Backowski. Jack is survived by several cousins. At his requests, there will be no funeral service or calling hours. A private graveside service will be held at the convenience of the family in the Kocher Cemetery, Lake Twp. Arrangements are by the Curtis L. Swanson Funeral Home, Inc., corner of routes 29 and 118, Pikes Creek. Jack requested that, if desired, memorial contributions be sent to Grace Community Church, 4122 Memorial Highway, Dallas, PA 18612.