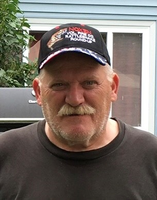 Edward Lee Nulton, Sr., age 63 of Beaumont, passed away peacefully Thursday, September 19, 2019 at Allied Hospice, Scranton Mr. Nulton was born on July 30, 1956 and was the son of the late Claude and Jessie Derhammer Nulton. Edward was employed by numerous places over his lifetime, retiring from the Cornell Ironworks in Mountaintop. After his retirement, he enjoyed doing yard work, working on cars and spending time with his grandchildren. He was a veteran volunteer fireman for 10 years at the Kunkle Volunteer Fire Company and loved to help his community. In addition to his parents, he was preceded in death by several brothers and sisters. Edward is survived by his best friend and soulmate of 36 years, the former Brenda A. Hoyt of Beaumont; sons, Edward Nulton, Jr. of Kunkle and Jesse Nulton of Beaumont; daughter, LeeAnn Nulton Knoss and her husband Robert of Tunkhannock; grandchildren, Heidi, Olivia, Breanna and Tucker; several brothers, sisters, nieces and nephews. Funeral services will be held Saturday, September 28, 2019 at 12:00 PM from the Kunkle Fire Hall, 3943 PA-309, Dallas, PA 18612 with Pastor James Rugg of the Mill City Assembly of God Church, officiating. Visitation will be from 9:00 - 12:00 PM on Saturday prior to the service at the Kunkle Fire Hall. Interment will be in the Dymond Section of Orcutts Grove Cemetery, Noxen Township. The family would like to extend a special thanks to the Kunkle Volunteer Fire Company for all the care and love they gave to Edward. In lieu of flowers, memorial donations may be made to the Kunkle Volunteer Fire Company, 3943 PA-309, Dallas, PA 18612.