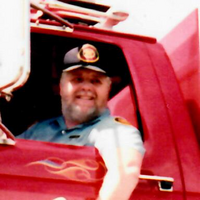 James W. "Captain Slippers" Russell, age 70 of Noxen, passed away Monday, October 31, 2022 at home. He was born in Shreveport, LA on June 22, 1952 and was the son of the late Willard and Frances Russell. James graduated from Meyers High School, Class of 1970 and was employed by J. Heater and Nancy Fashions as a truck driver. He was the captain of the Noxen Volunteer Fire Company, where he volunteered for 45 years, was a Boy Scout Leader, and volunteered with the Noxen Ambulance. James enjoyed model trains and traveled to Germany and Japan as an Air Force brat. He was an avid hunter and fisherman in his younger years. He also enjoyed beekeeping especially with Susan Smith, who helped him with "his girls", aka the bees. In addition to his parents, he was preceded in death by daughters, Melissa Margaret Headman and Crystal Joy Russell. James is survived by his wife of 50 years, Laura Russell; daughters, Cherie Lasinski (Daniel), Jennifer Henninger (Shawn, Sr.), and Alora Russell (Joseph LaRusso); siblings, Susan Young, Robert, David and John Russell; grandchildren, Jacqueline (Eric), Jonathan (Dez), Shawn, Jr., Mackenzie, Morgan, Madison, William, and Gabriel; great-grandchildren, Kylie and Blaze; numerous nieces, nephews, cousins, sisters-in-law and brothers-in-law. A memorial service will be held Saturday, November 19, 2022 at 6:00 PM from the Noxen Volunteer Fire Company Hall, 3493 Stull Rd., Noxen, PA 18636, with Pastor Nate Weaver of the Noxen United Methodist Church, officiating. Visitation will be from 5:00 PM – 6:00 PM prior to the service at the fire hall. Arrangements are by the Curtis L. Swanson Funeral Home, Inc., corner of routes 29 and 118, Pikes Creek. In lieu of flowers, the family humbly asks that everyone keep their needs in mind in the coming weeks.