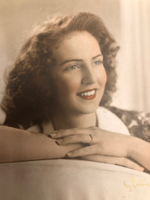 Bettie Gordon Shilanski, age 96 of Broadway, passed away Thursday, July 14, 2022 at Meadows Manor Care, Dallas surrounded by her loving family. She was born in Kingston on December 31, 1925 and was the daughter of the late Henry and Beulah Smith Calkins Bettie graduated from Kingston Township High School in 1943 and spent her early life living in Shavertown. She was an active member of her community, working with the Women's Christian Temperance League and Child Evangelism Fellowship, teaching Good News Bible Clubs for children for many years, and serving as a 4-H Leader for many years. Bettie proudly worked in the garment factories, primarily for Karen Manufacturing for approximately 35 years. She was active in the Broadway Methodist Church, teaching children's classes. She was most recently an active member of Living Word Baptist Church in Sweet Valley. Bettie followed gospel music groups for many years, traveling countless times to support these ministries. Her devotion and financial support of the Jacobs Brothers was unwavering. She lived in Broadway from 1950 until her death. Perhaps Bettie's greatest source of pride were her grandchildren, Jason and Jeremy Plumley. In addition to her parents, she was preceded in death by her husbands Burton L. Gordon in 1996 and Edward Shilanski in 2015; brother, William Calkins; and sister, Marie Carkuff. She is survived by her daughter, Beth Plumley and husband Jerry of Willis, TX; son, Gary Gordon and wife Joanne of Broadway; grandchildren, Jason Plumley and wife Noy, and their children Max and Morgan of Woodlands, TX, Jeremy and Hillari Plumley of Las Vegas, NV, Ryan Gordon of Dallas, and Melinda Jones and husband George and their children Aubrey and Mason of Dallas. A memorial service will be held at a later date from Living Word Baptist Church, 40 Hess Lane, Sweet Valley, PA 18656, to celebrate the life of Bettie. The family are eternally grateful to the loving church family of Living Word Baptist Church, Manor Care staff in Dallas, and all the staff of Compassionate Care Hospice, who were a great support and provided loving care to Bettie at the end of her life. Arrangements are by the Curtis L. Swanson Funeral Home, Inc., corner of routes 29 and 118, Pikes Creek Online condolences can be made at clswansonfuneralhome.com