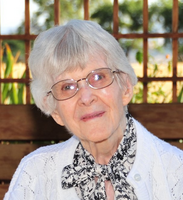 Nina V. Hunter, 96, of Westminster, Colorado passed away peacefully on Sunday, January 1, 2022. She was residing at the Arbor View Care Center in Arvada, Colorado at the time. Nina passed away from age related natural causes; having survived triple bypass surgery in recent years and the original strain of COVID. She was born Nina Violet Corby on November 25, 1925, to William Harvey Corby and Carrie Mae (Gates) Corby of Courtdale, Pennsylvania. She married Lester L. Hunter of Larksville, Pennsylvania in 1943. Shortly after, Lester went to the pacific theater to fight for his country. Upon Lester's return, they resided in Jackson Township, Pennsylvania and raised six children. They moved to Westminster, Colorado in 1976 where they were actively involved in pastoral duties with the Pillar of Fire Church. They were married for 36 years until Lester's death in 1980. Nina continued to serve the church as a deaconess and in other roles of the church ministry. Nina embodied the Christian ideals of love for all, humility, empathy, kindness and charity. Her home and her heart were always open to everyone. She often told her children that the moment she awoke, she would pray for her family and those in need. Endeared by many as 'Mom', she prayed constantly for family, friends, church and country. She often corresponded with the United States Presidents and beamed with joy when she received correspondence from The White House. She was preceded in death by her father, mother, brother, husband and infant daughter. She is survived by her six children, Ronnie (Rae Nell), Colorado; Robert (Cheyenne), Florida; Susan Wilson (Warren), Missouri; Gerald (Bernice), Colorado; Donna Shjarback (Alfred), New Jersey; Wade (Robin), Colorado and numerous grand and great grandchildren. Funeral services will be held Thursday, January 13, 2022 at 11:00 am from the Curtis L. Swanson Funeral Home, Inc., corner of routes 29 and 118, Pikes Creek. Visitation will be from 5:00 PM – 7:00 PM on Wednesday at the funeral home. Interment will be in Huntsville Cemetery, Jackson Twp. In lieu of flowers, Nina requested that contributions be made to the: Billy Graham Evangelistic Association 1 Billy Graham Parkway, Charlotte, NC 28201